3rd Sunday of the Month-Full Breakfast after each Mass - $8, Sept. thru April

New Crucifix
Parish Bulletin
This will take you to "Parishes online"  site.  Type -Church of Our Lady of the Sacred Heart in the search line. 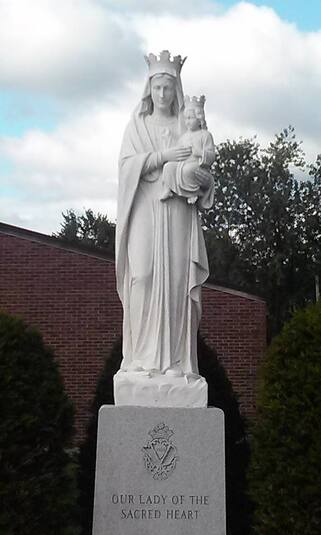 ​
Pastor's Note
The mystery of God’s kingdom on earthy, a reign of justice, love and truth can only be known by the witness of those who are committed to a better society, as God ;envisions it. Witnessing for God’s kingdom implies denouncing evil. Prophet Jeremiah in today’s first reading told the King Of Israel that the Jewish people are adopting pagan ways of life and urges the king to lead people in trusting in God rather than in the pagans. St. Paul in his letter to the Romans tells about the power of evil and all humanity’s solidarity with it. He was aware of  power of evil and its threatening power in society. Hence witnessing for God’s values can be risky when the Lord’s disciple encounters that power of evil and must oppose it.
“Fear no one, Nothing is concealed that will not be revealed, nor secret that will not be known…….., rather, be afraid of the one who can destroy both soul and body in Gahanna.” Fear God. That is a biblical concept that is often misunderstood. It does not mean that we should be afraid of God. It means that we should respect God, reverence God, and be more concerned with the fulfilling the Law of God that with the way others might respond to us. It is a particular fear that Christians feel at the moment they must witness to their faith in God, the Lord Jesus, and that mysterious kingdom of justice and love  to be established in society. Temptation is to keep silent, not to rock the boat.
In the Gospel reading for this Sunday Jesus says, “ Do not let others intimidate you.” He tells us to keep our priorities straight. He tells us that we should not even be afraid of people who could kills. “Do not fear those who deprive the body of life but cannot destroy the souls.”